Knight Department majoring in Winford school sophomore. In the eldest daughter of a prominent family "Ascot Marquis house", it is famous as a large aristocracy arranged in Su~iria, it is liked around the nature that is in contact with the bright and friendly. She has a mischievous side as she has a habit of fondling her friends such as Mio Kisaki (rare Akane Ryūzōji and Fiona Beckford) is often sacrificed. In addition, because also in social circles and has been in contact since childhood, sometimes it shows the behavior as a lady. Although not worked conspicuous in last year's tournament, it has a power of about catch up to advanced level, and aim to win in this tournament also for Mireille Marres Ascot (Noel's younger sister).

It is the first one that asked that she wanted Takahiro Mizuno to become her squire. As a result, even with all complete victory or the final round of the semi-finals in qualifying Lisa Eostre are overwhelming victory to such as, by that you have to base the Takahiro show a success, such as to exert its strength. Basic and faithful to the application, but wasted no attack and defense, and sometimes I make the struggle how to be a bold bet argument. 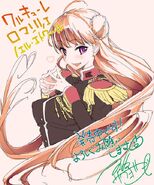 Add a photo to this gallery
Retrieved from "https://walkureromanze.fandom.com/wiki/Noel_Marres_Ascot?oldid=624"
Community content is available under CC-BY-SA unless otherwise noted.