This article is a stub. You can help Walkure Romanze Wiki by expanding it.

Fiona Beckford (フィオナ・ベックフォード Bekkufōdo Fiona) is a heroine of Walkure Romanze: Shōjo Kishi Monogatari. She is Lisa Eostre's classmate and best friend who is also the closest to a family that Lisa could ever have.

Winford in school freshman, Knight Department of majors. Lisa Eostre and the acquaintance from the time of admission test, often it is with Lisa. In so-called present-day children, on their own do not allow the and not bad own non-personality, there is that often conflict with other students. Arm of Jost in excellent person in one year, in the type of fight by one person and not want the same base Greither and Lisa, sometimes there is that you learn to watch Lisa game. The more cats run away just listen to hate a cry. Armor favorite, the state-of-the-art. ARETE company made in 2009, distinctive design of so loyal but not very many, Fiona prefers. It discusses is made of carbon shoulder armor inside right shoulder puff sleeves, I have specialized in the ease of movement of the time of the attack. GRIFFIN ARMOR type / material of titanium, carbon fiber / weight 8.7kg / manufacturing countries are Italy, Treviso.

Fiona is very protective of Lisa Eostre that she is very much a tsundere around Takahiro Mizuno and even despise him that she would often calling him names. 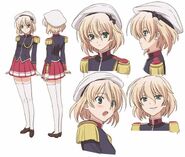 Fiona's Uniform Winford School and facial expression
Add a photo to this gallery
Retrieved from "https://walkureromanze.fandom.com/wiki/Fiona_Beckford?oldid=480"
Community content is available under CC-BY-SA unless otherwise noted.