This article is a stub. You can help Walkure Romanze Wiki by expanding it.

Akane Ryūzōji (龍造寺 茜 Ryūzōji Akane) is a heroine of Walkure Romanze: Shōjo Kishi Monogatari. She is Mio Kisaki's best friend at school who has a great fondness for Celia Cumani Aintree so much so that even saying her name causes her to lose focus.

Akane is very serious in terms of manner and behaves in a dignified fashion of the so-called Yamato Nadeshiko, it's in the figure of the woman hakama even in her private life. She jousts to the best of her ability in order not to neglect her practice while in class, as she loves creating new moves such as a wide variety of deformation technique, which shows her great dedication to the sport.

She greatly admires Celia Cumani Aintree believing everything she does is sacred. Akane was inspired by Celia to joust and become upset when others approa.

Akane is a sophomore at Winford and a friend as well as classmate in the knight Department of major of Takahiro Mizuno, an international student from Japan and she is the best friend of Mio Kisaki. Celia Cumani Aintree is sacred things, her inspiring, upset enough to not think normal myself in front. I like sweet things, but himself although I seriously and be very embarrassing as a person for the training of Jost, most have purchased, such as cake is hidden and lost the sweet temptation. Because I had been dating a father of evening drink at home, pretty heavy drinker.

Athletic ability is very high, I have the ability to exceed lightly the poor men. Feat kendo, housework (mainly cloth cliff) Holy Arrow making. My hobby is pressed flower making, sweets shop explore fashion related. Favorite color is pink. Favorite food is the mother of Akane creative mandarin orange sweets, tempura of Sanae. Favorite music in the US-POP, especially favorite female singer. Type of favorite men, me loosen their tension, friendly people there is tolerance. The one that is to cherish were taken with a ribbon and the whole family that I got from May of sister photo. Thickness of the arm is complex. I hate thing frog.Future dream is to become things in philosophical woman, such as the grandmother. In Akane root in the "More & More", it becomes clear that you have the discipline kendo, and fall in defeat to Celia in even tournament partnering as a base the Takahiro Greither. This is resulting in a slump state as would lose to the other party to win usually out is lost to mind in the wake. After that, it becomes that Takahiro to family to return to both been mistaken with his lover home. The home is not only working hard kendo, if you are working the work of the shaman, but had to do a dance by the festival of once a year by the appointment of Kumi, in May of dance it is evaluated the best in the past because there is no confidence in you are, but that it was dance perfectly in the past did not even once, their own to hear the voice of Takahiro in production is not a single person, always remembering that the Takahiro is attached to the next stunning success let. 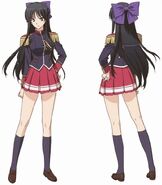 Add a photo to this gallery
Retrieved from "https://walkureromanze.fandom.com/wiki/Akane_Ry%C5%ABz%C5%8Dji?oldid=593"
Community content is available under CC-BY-SA unless otherwise noted.